The Board of Directors of Democratic Municipal Officials (DMO) has named Angela Rogensues a Blue Star Rising Candidate as she campaigns for United States Congress in Michigan’s 10th Congressional District.

The DMO serves to connect, engage, and empower elected officials who identify as Democrats. Democratic Municipal Officials initiated the Blue Star Rising candidate program to support promising Democrats who have made significant contributions to the organization and are running for a wider state or federal office. These candidates have been vetted and recommended by the DMO Board of Directors. 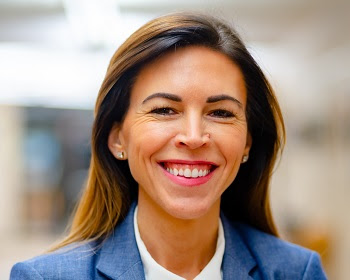 Born and raised in Macomb County, Angela has spent her career dedicated to public service. As a member of the Warren Council, Rogensues introduced a bill to create a Veterans Affairs Committee, and strongly advocated for working and low-income families. Her dedication to service drew recognition, and Governor Whitmer appointed Rogensues to chair the board and executive committee of the Michigan Municipal Services Authority.

In her work at DMO, Rogensues has served as Labor Chair, Michigan State Chair, Chair of the Council of State Chapters, and now as Vice President, where she holds a seat on the Democratic National Committee. Her commitment to organized labor has been well demonstrated during her time at DMO. Angela went above and beyond as Chair of the Labor Council, standing on picket lines, coordinating with unions on state legislation, and penning an op-ed with UAW President Rory Gamble supporting voting rights. She currently co-chairs the Michigan AFL-CIO Labor Caucus.

Upon hearing the news of her Blue Star Candidate certification, Rogensues said, “I am incredibly honored to receive the endorsement of the Democratic Municipal Officials. Thank you to my municipal colleagues from across the country who are tirelessly working to improve their communities by advocating every day for the needs of their residents. To endorse my candidacy for the United States Congress is an honor of a lifetime and I could not be prouder to stand next to them in our efforts to make the world a better place.”

The 10th District is purple, at times leaning more conservative. Rogensues‘ election would establish a Democrat in a seat usually held by a Republican. She would serve as a testament to Democratic, pro-labor values.

If you would like to learn more about Angela Rogensues‘ campaign or contribute you can visit angelaforuscongress.com.