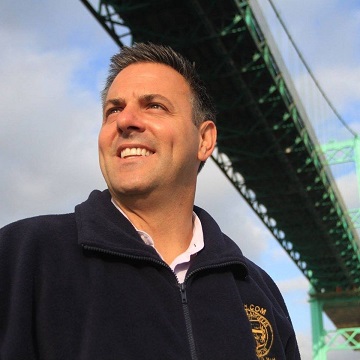 Buscaino’s journey with DMO showcases what can happen when local leaders engage with everything our organization has to offer. He was first invited to join by Los Angeles Mayor Eric Garcetti, who told Buscaino that DMO is a place where local elected Democrats could grow their skills and learn from the best in local politics. Buscaino spent his time at DMO building out his fundraising and leadership skills, developing his relationships with elected officials, national Party members, and business and labor leaders through DMO’s network. He is a strong contender in the race, having raised $818,000 in just three and a half months of campaigning.

DMO President and Philadelphia At-large Councilman Derek Green remarked on Buscaino’s run for the top seat in Los Angeles. “I have served with Joe as a Board Member of the Democratic Municipal Officials and the National League of Cities. As President of both of these organizations, Joe has demonstrated proven leadership to bring diverse constituencies together to achieve our goals. There’s a special camaraderie shared by those of us who have guided Democratic Municipal Officials as President. I know that Joe will bring the same passion, devotion, and care to the mayor’s office that he did when leading this organization.”

The focus of Buscaino’s campaign is addressing the everyday problems of Angelinos. The health of a city coming out of the worst pandemic of the 21st century, getting unhoused people off the streets, ensuring a city where everyone feels safe, and where those who work hard can afford a good life. He supports local business owners and industry, as well as environmental protections that safeguard the health of residents. He has a clear vision of an LA that works better for everyone, and a practical set of plans to achieve his goals.

Buscaino is the immediate past President of the National League of Cities, where he served as President in 2020. Under his leadership, the National League of Cities spearheaded the campaign for federal aid to help support local governments’ funding during the pandemic. That campaign culminated in President Biden’s stimulus bill, which will provide Los Angeles with an estimated $2 billion in recovery funding.

Whoever is elected as the next Mayor of Los Angeles will helm the second largest city in the nation. LA is grappling with many of the same policy issues other cities are facing, but on a considerable human and geographic scale. From homelessness to climate change to international trade, the next mayor will be expected to meet and set the example on cities’ 21st century challenges. Buscaino’s experience managing large organizations, network of problem solvers, and experience serving Los Angeles sets him poised to deal with the unique challenges facing Los Angeles.

If you would like to learn more about Joe Buscaino’s campaign or contribute you can visit https://www.joebuscaino.com/.