The Board of Directors of Democratic Municipal Officials (DMO) has named Barbara Jordan a Blue Star Candidate as she campaigns for Mayor of Rio Rancho, New Mexico.

The DMO serves to connect, engage, and empower elected officials who identify as Democrats. Democratic Municipal Officials initiated the Blue Star Candidate program to support promising Democrats who stand to retake a mayor’s office, flip a council majority blue, or break new grounds with their election. These candidates have been vetted and recommended by the DMO Board of Directors. 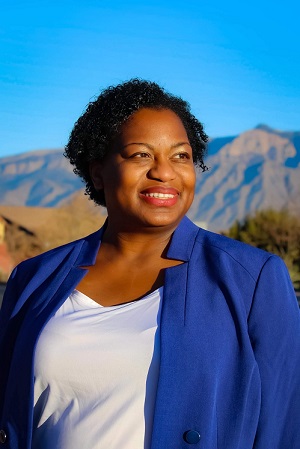 Jordan is a combat veteran, having served over 20 years in the United States Air Force. Her current work highlights systems of social injustice in New Mexico and abroad. She is a Court Appointed Special Advocate, and a graduate of Emerge New Mexico.

Her race for mayor is a campaign to bring new perspectives and energy to municipal office in New Mexico. Jordan’s personal history informs her work championing equity, inclusion, and mental health services, particularly for children. She will serve as a strong advocate for the disabled, LGBT, and BIPOC communities. Jordan’s infrastructure goals include repairing the city’s roadways and protecting essential groundwater from radioactive waste dumping.

DMO President and Philadelphia At-Large Councilmember Derek Green remarked, “Barbara Jordan has shown a commitment to this country with over 20 years of service in the Air Force and continued her commitment to the community by founding People Requiring Equality Systemic Systems (PRESS). Barbara’s campaign is about her experience of not feeling heard by city leaders and taking action to ensure all in the city feel heard in the future. I see the same excitement, energy, and commitment to serving people that many DMO members around the country in both rural cities and metropolitan areas have every day. I am thrilled to announce DMO’s endorsement of Barbara Jordan for Mayor Rio Rancho and look forward to working together in the future.”

DMO Political Director Alejandro Chavez, grandson of labor leader Cesar Chavez added, “My grandfather would say, ‘It’s never about the grapes or lettuce but always about the people.’ I see that in Barbara’s campaign and believe she will be the peoples’ mayor.”

Upon hearing the news of her Blue Star Candidate certification, Jordan said, “Being endorsed by DMO solidifies the work that I am doing for our community and my city. It is a clear signal that I am fighting for all people and for humanity itself. I know that with DMO by my side, we can do this.”

If elected, Barbara Jordan will not only become the first Black women elected mayor of Rio Rancho, but of any major city in the state. Her election would break new ground in the political landscape of the Southwest, and inspire more leaders of color to run for local office.

If you would like to learn more about Barbara Jordan’s campaign or contribute you can visit jordanforriorancho.com.

Are you up for reelection facing steep Republican opposition? Are you vying to reclaim a mayoral seat for Democrats, or flip a council majority blue? Reach out to DMO at alejandro.chavez@NationalDMO.org to learn more about applying for a Blue Star Candidate recommendation.