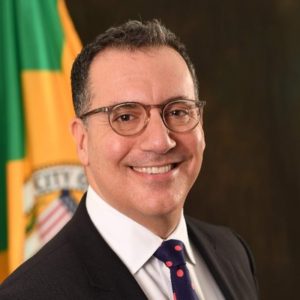 Councilmember Bob Blumenfield was elected to the Los Angeles City Council in March, 2013 and re-elected in 2017. Bob is focused on serving the San Fernando Valley’s day to day needs for City services as well as facilitating the long-term job and economic growth that will help ensure the vitality of local neighborhoods and the City as a whole.  Prior to his election to the City Council, Bob served in the California State Assembly from 2008 – 2013 working for all of the San Fernando Valley communities he continues to represent.

Capitol Weekly called Bob “a shining light” with a “reassuring amount of perspective that is uncommon among so many politicians.”  He is considered an environmental and consumer champion and has won numerous accolades and was named “Legislator of the Year” from a diversity of groups which included,  TechAmerica, Easter Seals, New Horizons, ONEgeneration, the California Chiropractic Association, the Los Angeles League of Conservation Voters and Californian’s Against Waste.  Planned Parenthood gave him both their prestigious “Champion for Choice” Award and their “Advocate for Access” Award.