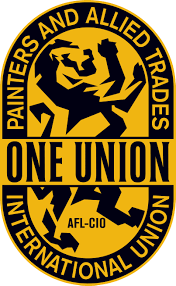 The International Union of Painters and Allied Trades represents a growing force of men and women in the United States and Canada who work in the Finishing Trades – Industrial & Commercial Painting, Drywall Finishing, Glazing & Glass Work, Sign & Display and Floor Covering Installation, and many more successful careers in the construction industry and public sector.

Our union, like many modern labor unions, was founded in the 19th century to set standards for uniform compensation in the trades and provide a community for workers to share ideas and solve problems. The Brotherhood of Painters and Decorators of America was organized formally in 1887. Within a year, the union boasted a membership of over 7,000 tradesmen and more than 100 local unions. These trade unionists soon realized the power that they had together, rather than staying separate and facing their problems alone. Backed by a growing centralized union, these dedicated organizers won victories over oppressive working conditions that were once thought unchangeable. Today, the IUPAT continues to do its part to lift working families and the rest of the middle class by marching to the words of our founders: “Single-handed we can accomplish nothing; but united there is no power of wrong we may not openly defy.”