Labor Resources from the DMO Retreat

DMO held our annual Board Retreat in beautiful Detroit this past September. We wanted to send an overview of the Retreat so that our full membership could benefit from the resources we discussed during the week, and connect with our national partners. We encourage you to get in touch with our labor partners to secure their insight and resources for your city. Email me at Nils.Robbins@NationalDMO.org for their information.

This email is part of a multi-day series on the DMO Retreat. Today we will cover the Labor Council panel. You can view Monday’s email on our Policy Panel here.

Following our policy discussion came Hot Topics for 2020 with Cities and Labor. The Labor Council panel, moderated by Philadelphia City Council Member and DMO Labor Council Chair Derek Green, highlighted the work of our Labor partners from the Ironworkers, the Painters, and Teamsters. The Ironworkers’ Michelle Frisk, Ph.D talked about how many labor unions are shifting from federal level activism to state and local activism. She reported that they are getting a lot more done at the at state, county, and city levels to ensure workers are paid fairly and have safe workplaces. She updated DMO on so called Industry Recognized Apprenticeship Programs (IRAPs) and reminded electeds on how these certifications can trick cities into employing non-union companies held to a sub-industry standard.

The International Union of Painters and Allied Trades were represented by Britton Loftin, who was hopeful about union support despite attacks on Labor from conservatives who have consistently tried to reduce workplace standards. He pointed out that if the building trade apprenticeship programs were a university, they would be the biggest university system in the United States. They are training workers and providing a pathway to the middle class. While good training is incredibly important, it is only the first step. Among many other laws, IUPAT has been advocating PRO Act – Protecting the Right to Organize that safeguards workers trying to organize a union. It strengthens workers’ rights to conduct organizing campaigns to form a union, hold elections, and get to the bargaining table. This is one of the issues UAW employees are fighting for as their strike continues. Another is giving temporary workers the opportunity to become full-time workers who can join a union and have a voice on the job. Temp workers have in some cases been working for GM for two or three years and are still not considered regular employees.

Panelist and Teamsters Political Director Tyler Longpine used the example of the Los Angeles Port workers who made strides when they were legally classified as employees, thereby gaining the opportunity to join a union. As part of the Teamsters, they fought for back pay from employers who engaged in unfair labor practices. They also entered into Labor Peace Agreements with employers, which allowed union neutrality in exchange for a stop to strike actions and other actions that called out employers publicly. Longpine also gave credit to courageous local Democratic leaders such as Los Angeles City Council Member and DMO President Emeritus Joe Buscaino. Buscaino was critical in helping to develop Project Labor Agreements (PLAs) in Los Angeles. He called out bad employers at the Port of LA, and sought to replace them with companies with higher labor standards. Those standards were not only good for the workers but also for the city as a whole, Longpine pointed out. AFSCME shared an informative one pager on PLAs with DMOs as part of the panel.

Want to learn more about the organized labor terms used in this email? Get in touch with Christine.Senteno@NationalDMO.org or attend one of our regional City, Labor, and Jobs roundtables. 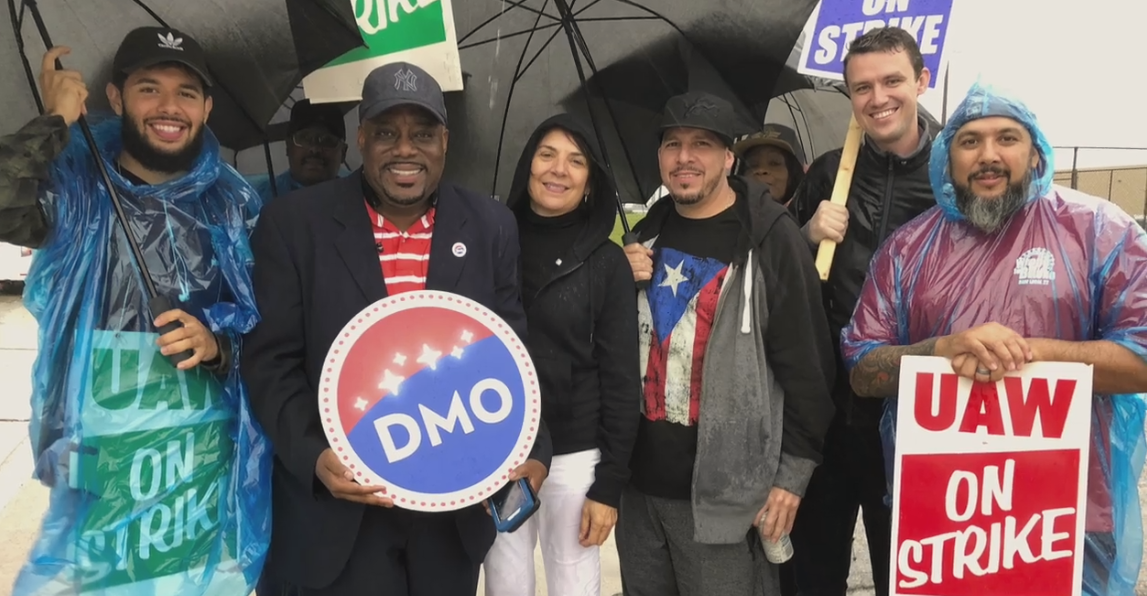