If Tuesday night was any indication, Democrats are going to have an incredible year in 2020. Democrats flipped both the Virginia State Senate and House of Delegates blue. We also won the governorship in Kentucky, with Andy Beshear beating out incumbent Matt Bevin. These wins could signal a truly massive blue wave in next year’s elections.

But our victories were not limited to the state level. Democrats took over the mayor’s office in Bloomington, MN, Davenport, IA, Wichita, KS, Edmonds, WA, and Livonia, MI. We also reelected many of our incumbent mayors, including DMO Maryland leaders Emmett Jordan and Patrick Wojahn in Greenbelt and College Park respectively, as well as DMO Council of State Chapters Chair Ian Baltutis in Burlington, NC. Maryland State Chapter Chair Denise Mitchell held her council seat in College Park, as did DMO Labor Chair Derek Green in Philadelphia. The blue wave also swept through Mike Pence’s hometown of Columbus, Indiana, which now has a 4-3 Democrat controlled city council!

DMO Blue Star Candidate Ty Stober won an overwhelming reelection to the Vancouver, WA City Council. Unfortunately Ben Stuckart did not secure victory in his Blue Star campaign for Mayor of Spokane, but it was a close race and hard fought, and we look forward to his future endeavors. 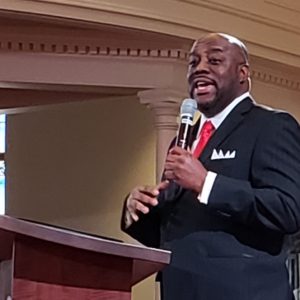 Perhaps the most significant DMO development last night occured in Savannah. Blue Star Rising Candidate Van Johnson won the most votes, and is now headed to a December 3rd runoff election against the incumbent Republican mayor. Savannah is the heart of the DMO Blue Star program. We first began reaching out to local Democrats to support their races after the Democratic Mayor of Savannah lost to a Republican in a campaign she might otherwise have won.

We now look to Savannah Alderman and DMO National Treasurer Van Johnson II to reclaim the city. First elected in 2003, Alderman Van Johnson has proudly been representing Savannah’s 1st District for the past 16 years. He was elected by his peers to the position of Vice Chairman of the Council, and later as Mayor Pro-tem. He serves as Chairman of the Human Development Committee at the National League of Cities. Before entering government service, he worked in Savannah’s religious community, as a radio host, and as a police officer. In 2010, he was selected by the Georgia Governor Perdue and the Obama Administration to serve on the Selective Service Local Board.

Van needs your support now more than ever. If you would like to learn more about Van’s campaign please visit http://vansav2019.com